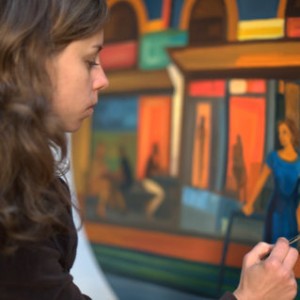 „I fancy something, and then the picture rules. It does never become exactly what I pictured. This is a start-up, a process. A thought comes, a process starts, and at the end a picture springs up. It also occurs though that pictures begin to dance.”

Distinctive, oddish feelings dawning at the border between dreams and wakefulness are painted by Lilla Bodor. Every motif of her belongs to and arise from reality however, audience are guided by the paintings to territories beyond perceptivity.
Sensibility of the artist and the art of sensibility. Lila Bodor’s channels through pictures.

Colliding mimesis with the pictures of imagination using an optical rule – but what does it mean and how it is realized in the art of painting? I had a talk with Lila Bodor painter-artist about this and other interesting issues.
She graduated from the Hungarian University of Fine Arts in 2007, and already in the same year was awarded Béla Gruber-prize. The book titled ‘Half-Infinity’ was illustrated by her, and that was also rewarded a high-level acknowledgement.
Her current exhibition can be found at Hotel Astoria, Budapest.
There is always a real starting point: a perspective, an actual experience, a motif, and the whole I filter through my imagination. I consider it further, alter it, and this is what constitutes the basis of the painting. In a formal way, I use a system of notations made of images that is an image-world bent peculiarly, characteristically of me. It started from convex mirror, but I already use it as my own shape-connections.
“Mirror is the master of painters” (Leonardo) – and it is definitely like this in case of Lila Bodor. She holds a distorting mirror to the world, so that our fantasy can soar. But wondering how her soaring commenced?
I was hit by the possibility of game that I was able to build a system of notations made of images from it that is not optically exact, thus pictures are not exposed, and I do not even use a mirror for it anymore – I applied one at the beginning. Now I construct by heart, as a matter of fact I use an image-system.
Nevertheless, serious pictures sprang up from the game, and it is reflected by the current exhibition.
One of my favourite works is called Small studio. It was painted early, in the atelier of Hungarian University of Fine Arts. A very simple situation that light falls through the window, and a detail I found intimate was put in an appearance.
The artist is very fond of each and every picture, she would never give out something she is not satisfied with. However, there is almost always a difference between what she envisages and what is realized of it.
I fancy something, and then the picture rules. It does never become exactly what I pictured. This is a start-up, a process. A thought comes, a process starts, and at the end a picture springs up. It also occurs though that pictures begin to dance.
Movement, moves and this power of expression are of a great interest to me and I use this in my paintings as well.
This picture is titled “Birth”. It is visible that there are ‘trickled’ sections in it. I started to paint it in the afternoon the day before my birthday. It was almost ready. I left it to dry on the bench since it was an oil work on canvas. I was woken up by soaking downpour the next day at 5.00 in the morning. My first thought was that I left the painting outside. I was rushing out. It was raining such heavily that it throbbed painting-stains from the canvas, and colours run into one another. This was of an allegoric interest to me at that time. I began to build something and another mind interposed. It is not my intention to mysticism it but I experienced it this way and hence the title Birth. I believe that in case a question is conceived of, we do not have to search for the answer because we will get it. That time I asked a question to myself, and I think it was an answer.
Art of painting is a part of my life, I could not exist without it. It happens that I do not leave the studio for days. A process that can be described by the curve of charging up and work.